Neal and I met at the Mean Fiddler, an Irish bar located a few blocks from Times Square. Neal was on holiday with his friend Stu who traveled from the UK to see American sights.  Little did he know, that night he would meet the love of his life.

I myself was on a business trip, tired and not interested in being “cute”, but I doned a peacock feather that night to add some flair to my outfit.  I strode up to the bar and ordered a beer (something I have done a million times over) and began to strike up a conversation with these two friendly British gents.

Three hours later, I was handing off my business card to Neal with my cell phone number scribbled on the back.  I walked out of the bar, thinking that I would never hear back from this nice guy.  Three days later, there was an e-mail from Neal in my work e-mail account.  I was surprised and flattered that he remembered me.

From that first e-mail our lives were changed forever.

Communicating on a daily basis through e-mailing, Skype or cell phone allowed us to get to know one another without distractions or hesitations.  Soon, Neal came out to the United States to visit me for his birthday… then again for three weeks at Christmas time.  He survived meeting the family, in fact he fit right in. After our first New Year’s kiss, we knew that we were going to have many more in our future…

Plans were set for my spring trip to the UK, with the countdown set to go. We began talking about our future…engagement and marriage.  Neal asked me what my ideal ring would be, and I sent him a picture of a ring.  Within weeks, a packaged was delivered to me.  The idea we had would be to have the ring size and insured prior to my trip to the UK.  I would pass of the ring to Neal, who would ask when he was ready.

That evening while we were on video Skype, I tried on the ring for size.  It was perfect.  Seeing that moment, Neal knew that he couldn’t wait 2 months to ask me to marry him… he had to right then and there.  So, even with 4,200 miles keeping us apart Neal asked me to marry him with my reply being ,” Are you serious?”  Once I realized that he was, I shed some tears…smiled and said, “Yes!”

Being in a long distance relationship isn’t ideal or perfect, but the love we share for one another is.  We e-mail and Skype on a constant basis, making our communication channels both honest and open.  Neal and I are very much looking forward to lifetime filled with adventure, laughter, love and friendship. 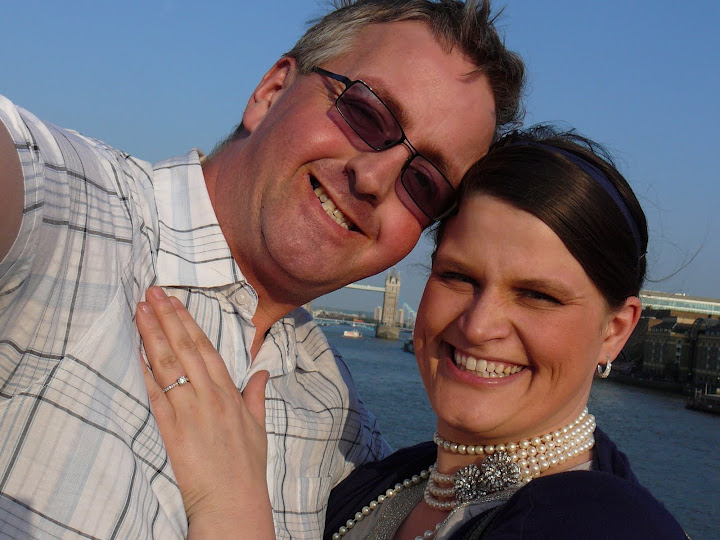